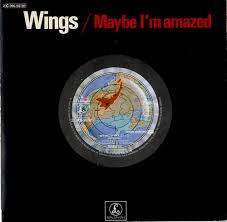 "Maybe I'm Amazed" was recorded and mixed for his first Apple solo LP at Abbey Road/EMI Studio two in one day (February 22 1970). This song featured more instruments than some of the other tunes on the LP with the piano, bass, drums, various guitars and vocals/back up vocals overdubbed mainly by Paul with Linda. The song was written about and written for Linda McCartney. It ended up being the second last song on the B-side ( the sliced Apple side of the "McCartney" LP).
Although the song at the time was not released as a single, there was a promotion film made using Linda McCartney's photo stills and the song aired often on television. When the McCartney catalogue was transferred from Capitol Records to Columbia Records, this version of "Maybe I'm Amazed" was put out as an "oldies" single on Columbia in 1980.
Seven years later at the beginning of 1977, the live version of the song from the LP "Wings Over America" was released on 45 with the B-side being "Soily" - both songs taken from the concert LP. There was also a Capitol promo 12 inch single of the song  (Capitol SPRO 8574/77) mixed and edited in both stereo and fold-down mono. The 45 single reached the 10 ten in the charts in 1977 and has become a classic on 70s radio. The 23 inch single promo was also re-issued for Records Store Day in 2013 by Hear Music.
The song has been a staple of Paul McCartney's live shows starting with both European tours in 1972,  The "James Paul McCartney" television special in 1973, the 1973 UK Tour, it is also featured in the "One Hand Clapping" segment from 1974, the 1975 UK and Australia Tour, the 1976 North American and UK Tour, the "Wings Over The World" television special in 1979, The "Rockshow" movie originally premiering in 1980 and re-issued/remastered in 2013 by MPL, the 1979 UK Tour, the 1989 European and North American Tour, the 1990 UK and US Tour, the "Tripping The Live Fantasic" concert LP from November 1990,  it was also played at the tail end of a "Simpsons" episode in 1995,  the song also appeared in classical form performed by the Loma Mar Quartet on the "Working Classical" LP (EMI Classics) in 1999, it was performed on the "Back in the US/ World" 2002/2003 tours and CDs, the "Paul McCartney In Red Square" DVD from 2005 and the "Space Within Us" DVD from 2006,  it was played on his "On The Run Tour" of 2011 as well as his "Out There" tour of 2013. In 2015, the song was featured on the "Saturday Night Live: 40th Anniversary" special. The song was also performed on his "Freshen UP" tour of 2018.

"Teddy Boy" was a song written by Paul McCartney in Rishikesh, India around March of 1968 and later refined in Scotland and London. The song was going to be offered up to The Beatles first for the "White Album" and it was also rehearsed and recorded in January 1969 for the "Get Back/Let It Be" project but was not chosen for official release although early versions of the song appear the Glyn Johns mixes/ sequences for early "Get Back" LP consideration. The revamp was undertaken in early 1970 when "Teddy Boy" was dropped from the sequence with George Harrison's newly recorded "I Me Mine" and "Across The Universe" taking it's place on the LP ("Teddy Boy" is not seen in the movie whereby the other two songs are). The song taken from both the January 24 and January 28 1969 "Get Back/Let It Be" sessions from Apple Studios can be found on the Apple 3 LP/2CD project "Anthology 3".
Paul must have really loved this tune as it was also recorded at his St. John Wood home on his Studer four track machine with acoustic guitar, bass and Paul/Linda vocals (Linda on harmonies). This version was brought to Morgan Studios in London and drums/more vocals were added. The song was also mixed  in stereo at Morgan between February 10/20 1970 and released on the Apple LP/CD "McCartney".
Posted by Mr. Kite at 10:13 AM 1 comment:

"Momma Miss America" is on Paul McCartney's first Apple solo LP known simply by the title "McCartney". This was recorded as two instrumental demo pieces with the first part going under the working title "Rock And Roll Springtime" as evidenced by said title announced before the take. The performances were completed at Paul's home on Cavendish Avenue in London.
The first part of the song consists of an electric guitar with added tremolo, bass, piano and drums. There is an obviously edit just prior to the two-minute mark in the song whereby the second part of the song appears. The instrumentation is different here with the addition of acoustic guitar and straight electric guitar as well as the piano, drums and bass.
The song may have been edited either by Paul or during the mixing stage at EMI Abbey Road Studio 2 in London on February 21 1970.
The song was also used on the soundtrack to the 1996 film "Jerry Maguire" which was probably suggested by director Cameron Crowe. Both the LP version and the soundtrack version have the same stereo mix.