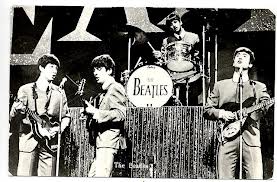 The Beatles performed on this variety show on October 13 1963. The songs were performed live in front of an audience. The Beatles were introduced by the host Bruce Forsyth on this ATV program. Four songs were played for the screaming fans: the first song was the previous third single A-side "From Me To You", the second and third song consisted of the current single starting with the B-side "I'll Get You" followed by the A-side "She Loves You". Finally, the crowd pleaser in every sense of the word, the Beatles finished the set by playing "Twist and Shout"; the LP track from the first album and the closer.
I have searched youtube for some footage of this but it appears that none is available. The only footage is The Beatles leaving the venue that is featured on the "Anthology" commercial DVD. Also, most of the songs from this show have been bootlegged in terrible sound with the exception of "I'll Get You" which is commercially available on the 3-LP/2-CD Apple release "Anthology 1". "Twist and Shout" can be found on the vinyl bootleg "The Beatles At the Beeb, Volume Seven". As for the other two tunes, they are featured on some obscure CDs "Road Runner" and "Mythology, Volume 1".
Posted by Mr. Kite at 9:41 AM 14 comments:

"She Loves You" live on The Ken Dodd Show 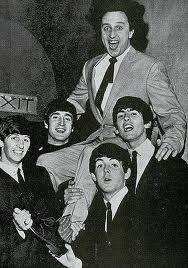 On October 09 1963 (five days after their appearance on "Ready, Steady, Go") The Beatles arrived at the BBC Paris studio in London. Their mission was to record a live version of the latest single "She Loves You". This they managed to do on "The Ken Dodd Show".  Mr. Dood was a Liverpool comedian. This date was also John Lennon's 23rd birthday. The show aired almost a month later on November 03 1963.
This recording of "She Loves You" can be found on the Great Dane CD set: "The complete BBC Sessions".
Posted by Mr. Kite at 2:28 PM 1 comment: 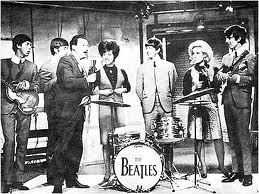 On October 04, 1963 The Beatles appeared at Studio Nine (number nine, number nine) at the Television house in London for an appearance on the television show "Ready, Steady, Go!".  The Beatles also brought their instruments with the appearance of the unusual Rickenbacker for George and Paul's new Hofner with the separated pick ups (which he would use for most of his career).
The Beatles mimed to three numbers: The first one being the last song on the first LP "Twist and Shout" along with the latest single b-side "I'll Get You" and it's accompanying A-side "She Loves You". In between the first and second number, Paul,George, and Ringo are interviewed by Dusty Springfield. The second song is mimed and then another interview takes place between John and Dusty Springfield. The third song is mimed and then questions from viewers are read by the host Keith Fordyce with involvement from all four Beatles.
The show ends with a miming contest judge by Paul. The winner is a young girl identified as Melanie Coe. In one of the strangest twists in the Beatles' story, Melanie Coe would run away from home in early 1967 and eventually her interview would appear in the "Daily Mail" newspaper. Paul would read the article and be inspired to compose the Sgt. Pepper track "She's Leaving Home".
Here is a link to the show (slightly edited).

The Beatles were continuing to work on the second LP September 12 1963 at EMI Studios number two. Three songs were recorded on this day: "Hole Me Tight" (see previous post), "Don't Bother Me" and "Little Child".
The basic track for "Don't Bother Me" has been captured on reel and exists on various bootlegs from years past. The first attempt is take 10 and is complete but played loosely. The next two takes break down and don't make it to the end of the song. George Harrison (the composer of the song) also lets the band know to be careful with the speed (tempo) of the song. Finally, take 13 is the one used on the commercial LP with overdubbing added.
Basically, this Harrisong can be found on the "Unsurpassed Masters" bootleg CD series: take 10 can be found on Volume 06 while 11, 12 and 13 can be found on Volume 01.
Posted by Mr. Kite at 10:58 AM 23 comments: 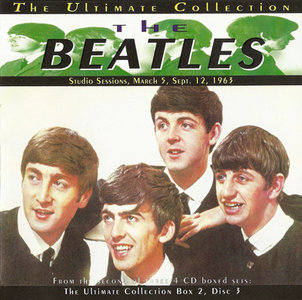 There are not many outtakes from the Beatles' Second UK LP "With the Beatles" but a couple of tunes have been issued and "Hold Me Tight" is one of them.
The song was originally recorded at EMI Studio Two on February 11 1963 in order for it to appear on the first UK LP "Please Please Me". Nine takes were completed with four edit takes and it was decided to scrap the song at that point. None of these takes have been released (as far as I know) although it would be interesting to hear the genesis of the tune at this point.
Fast forward to September 12 1963: The Beatles are once again at EMI Studio Two working on the second LP and "Hold Me Tight" is once again brought to the fore. This time, we have various takes that have been available on bootleg. There is a short rehearsal take (a fragment actually) before we get into the recorded takes:  Takes 20, 21 and 22 have vocal mistakes by Paul and/or backing vocal mistakes. Takes 23 picks it up again with another vocal mistake by Paul and take 24 nails the backing and overdubs are added to this.
The overdub session consist of takes 25 and 26 (this overdub being used on most of the released version). Takes 27 and 28 break down while take 29 is also completed and could be edited onto the final commercial release as well as take 26.
According to John C. Winn's excellent book (Way Beyond Compare): it is take 26 used on the mono version of the song and maybe take 29 finally used for the stereo version.
The session can be heard in parts on both "Unsurpassed Masters Vol. 1" and "Unsurpassed Masters Vol. 7" on compact disc. If you are looking for take 20, it can be found on the vinyl LP "Arrive without Travelling/Arrive Without Aging".  For the entire session, you can find it on the CD "The Ultimate Collection Volume 2, Studio sessions, March 05 and Septe
mber 12 1963".
Posted by Mr. Kite at 11:02 AM 1 comment: