The Beatles performed live at the Empire Stadium in Vancouver, British Columbia, Canada on August 22 1964 in the evening. The attendance for this show was around twenty thousand fans so the place was packed. There also seems to be quite the turbulence surrounding the group as the security for this place was lacking for a better term.
We have the entire show available and the sound is pretty good. There are a couple of interruptions between songs by the host DJ Red Robinson and eventually by their press agent at the time Derek Taylor. Red Robinson urges the crowd to get back just before "Can't Buy Me Love" is performed and Derek Taylor relays the same message before "A Hard Day's Night". The songs performed during this evening show include: "Twist and Shout/ You Can't Do That/ All My Loving/ She Loves You/ Things We Said Today/ Roll Over Beethoven/ Can't Buy Me Love/ If I Fell/ Boys/ A Hard Day's Night/ Long Tall Sally". Essentially, it's the same line up as Seattle but "I Want To Hold Your Hand" is absent from the set list.
The entire concert can be heard on the bootleg LP "Vancouver 64". I've added the youtube link below (which is available in three parts) and you can hear the audio for this performance. 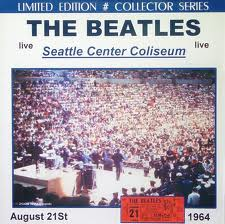 The Beatles played at the Seattle Coliseum on August 21 1964 as part of their first North American Tour. The entire show exists; as well as the arrival and departure interviews and chat with some of the members and the audience. A bit of the press conference is also available.
As far as the music performed, the Beatles essentially played the same set list every night on this tour. For Seattle, the songs performed included the following: "Twist And Shout/ You Can't Do That/ All My Loving/ She Loves You/ Things We Said Today/ Roll Over Beethoven/ Can't Buy Me Love/ If I Fell/ I Want To Hold Your Hand/ Boys/ A Hard Day's Night/ Long Tall Sally".
This particular show has a lot of noise and screaming during the audio and is not recommended as the best recording of the tour. The future shows available are much better. You can find the show on CD bootlegs such as "Atlanta/Munich/Seattle" and "Northwest Nights".
I've included some chat and interview material below from the "youtube" channel. You can also see some chapters of songs with the audio from the above bootlegs interspersed within the site.
http://www.youtube.com/watch?v=d8YoNx2Wz5o 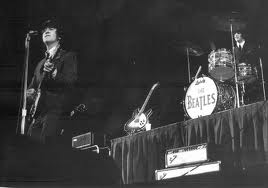 The Beatles hit the USA in a big way. They were unstoppable at this point and this was their first proper American/Canadian tour.
The first inlking of this tour was a performance at the Cow Palace in San Francisco, California on August 19 1964. Lucky for us, there is footage of the show that exists. This was footage prepared by the local television station KCRA. As you can see below, there are fragments of the live show including "Twist And Shout", " You Can't Do That" and "A Hard Day's Night" whereby you can see the Beatles performing on stage at this point. Since it was 1964, there was still the uniform of the dark suits and white shirts typical of this era.
I've included a youtube video which may or may not be the actual audio since it includes a lot of other tunes in between the above mentioned titles. Otherwise, the audio can be found on such CDR titles as in "Live: Make As Much Noise As You Like".
http://www.youtube.com/watch?v=-eKb-BRt7Dw
Posted by Mr. Kite at 9:29 AM No comments: 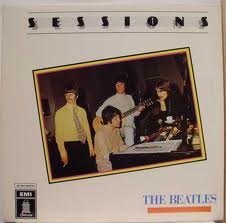 On August 14 1964 during recordings for the upcoming fourth LP to eventually be titled "Beatles For Sale", the lads entered EMI Studio 2 to record a cover version of a Little Willie John tune entitled "Leave My Kitten Alone".
Five takes were accomplished with a tambourine, piano and doubled John Lennon vocal as overdubs for the recording. The song was never issued commercially for the fourth LP, and it was never properly mixed until much later after the group had disbanded and EMI decided to take another look at the recording for future use.
There are now two mixes available for your listening pleasure. Both mixes are from the same recording (take 5 with the overdubs) but the earlier mix has a quick false start at the beginning and is not as long as the second mix. Both mixes are also mono (with a bit of stereo-ish reverb added).
You can find the earlier mix on any of the "Abbey Road Video Show" presentation bootlegs such as "File Under" and "Not For Sale"
(this is the rare one with the false start) and the later mix is found on various "Sessions" bootlegs on vinyl and CD. The song was eventually released on Apple's 3-LP/2-CD "Anthology 1" set. It's always been a mystery to me why the band decided not to release this. It's a smokin' song and it rocks !!
Posted by Mr. Kite at 10:04 AM No comments: