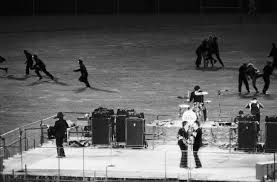 It's amazing that the 1966 world tour has very, very little audio of the actual full concerts. Apart from Germany and Japan, the only complete show that I know of from the US is the final show at Candlestick Park in San Francisco on August 29 1966.
The new LP was "Revolver" and the single was "Yellow Submarine/Eleanor Rigby" but none of these were played. Only "Paperback Writer" was attempted from the "Revolver" sessions and nothing else. By this time The Beatles were sick of touring and looking forward to establishing themselves as a recording unit which they would do quite nicely.
This concert was supposedly recorded on cassette by the Beatles' press office Tony Barrow who was instructed to do so by the group. The Beatles would normally forbid any filming or recording of their concerts without special permission and as this was a special occasion (the entire group knew this would be the last concert) they went ahead and recorded most of it. The last song on the tape is the beginning portion of "Long Tall Sally" (replacing the usual "I'm Down") and then the 30 minute tape ends abruptly.
The set list for the show is as follows: "Intro"/ "Rock And Roll Music"/ "She's A Woman"/ "If I Needed Someone"/ "Day Tripper"/ "Baby's In Black"/ "I Feel Fine"/ "Yesterday"/ "I Wanna Be Your Man"/ "Nowhere Man"/ "Paperback Writer"/ "Long Tall Sally" (portion).
The entire show can be found on various bootlegs including the vinyl LP "Candlestick Park, San Francisco '66"/ the CD "Live In Paris 1964 and San Francisco 1966"/ "Candlestick Park: Big Events of '66"/ "Shea/Candlestick Park".
https://www.youtube.com/watch?v=hZqmEnjvS2M 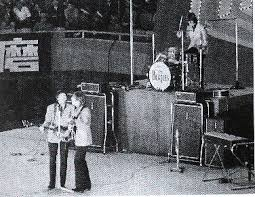 The second show filmed by NTV Channel 4 in Japan included  a Friday afternoon concert performed at the Budokan Hall in Tokyo on July 01 1966. This performance can be distinguished by the Beatles wearing white suits rather than the earlier performance with the dark suits.
This "white suits" performance is a bit rare than the original first performance. The audio for this performance can be found on the bootleg LP "The Beatles Tour: the Great Take Over" as well as "Budokan 66".
The playing and singing on this version is a bit better than the first one although there is still a lot of sloppyness but I'll let you, dear listener, be the judge of that. None of the tunes have been released commercially.
http://www.dailymotion.com/video/xfygz_the-beatles_music 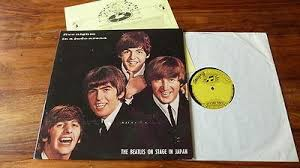 The Beatles continued onto their 1966 tour with a visit to Tokyo, Japan and the first two shows (of five) were videotaped for Tokyo's NTV Channel 4 television. The program was called (in English) "The Beatles Recital, From Nippon Budokan, Japan".
The first show of the series can be distinguished by the fact that the stage suits for this particular concert were dark green. The television show is of excellent quality with full colour and good sound. The Japanese audience in these shows are relatively quiet and the music can be heard throughout, The Beatles can also hear themselves during the show as well. The entire setlist is recorded in order and it is probably one of the truest and best documents of a Beatles concert.
The problem lies with the performance. Both recorded shows sound as if The Beatles lack rehearsal, the band sounds out of tune and lazy. Only McCartney really puts any effort into it; the playing is sloppy. A bit of a shame.
The "dark green" suits show was from July 31 1966 and the Beatles were on stage at approximately 06:30 in the evening. The line up of songs include: "Rock And Roll Music", "She's A Woman", "If I Needed Someone", "Day Tripper", "Baby's In Black", "I Feel Fine", "Yesterday", "I Wanna Be Your Man", "Nowhere Man", "Paperback Writer" and "I'm Down".
The entire audio of this set can be found on the vinyl bootleg "Five Nights In A Judo Arena". The Swinging Pig version on compact disc used a videotape of the concert for it's sound. The video/audio of the entire set was also released in Japan by Apple on laserdisc "Beatles Concert At Budokan 1966" in the early 1990s. The first two songs from this concert were commercially released on the 3-LP/2-CD Apple "Anthology 2".
http://www.dailymotion.com/video/xsvsky_the-beatles-live-in-japan_lifestyle 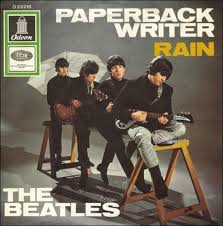 As in the previous post and chatting about the concert in Essen and the afternoon early show, the late show has not been bootlegged..or has it?
It seems that there was a reporter from WDR in Essen Germany on June 25 1966 at the Grugahalle especially being present in order to interview fans during the show. Luckily, it seems that he also caught the performance of "Paperback Writer" which was the only tune performed by the Beatles on this tour from the 1966 sessions and was the latest A-side to their new single.
This portion can be heard on the CD entitled "Die Beatles En Essen". The CD contains various interviews  with the Beatles on this day as well as the individual Beatles.
Posted by Mr. Kite at 10:20 AM No comments: