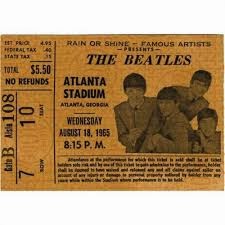 During the Beatles 1965 North American tour, they played the Atlanta Stadium on August 18 1965. This particular concert was recorded by the local radio station WQXI on this date.
The songs for this show consists of "Twist And Shout", "She's A Woman", "I Feel Fine", "Dizzy Miss Lizzy", "Ticket To Ride", "Everybody's Trying To Be My Baby", "Can't Buy Me Love", "Baby's In Black", "I Wanna Be Your Man", "Help!" and "I'm Down". Note that "A Hard Day's Night" was also on the set list but it was not recorded that night / or it was not broadcast probably.
The only song change from the Shea Stadium show was Ringo's number. When at Shea, he sang "Act Naturally" but it would seem that the crowd was a little baffled by the number. When it was performed, the song had not yet been released in North America and this is probably why the number was changed back to "I Wanna Be Your Man". Too bad.
This show can be found on various CD bootlegs including: "Atlanta 65", "Atlanta/Munich/Seattle" as well as "Vinyl To The Core".
Here's the audio of the show:
http://www.youtube.com/watch?v=IdQh8jol39k

The Beatles started their 1965 North American tour at Shea Stadium in New York City, USA on August 15 1965. This particular performance was recorded and filmed for an upcoming television special to be shown on the ABC network and on BBC1 in the UK. The broadcast was shown in the UK on March 01 1966 and it was shown in North America on January 10 1967.
The delay of the broadcast was due to the overdubbing of bass, keyboards, and entire songs "sweetened" for the soundtrack. This task was undertaken in January of 1966 (this is in a later post). For the August 15 1965 show, the video remains true to the performance.
The songs performed at the Shea Stadium concert for approximately 55,000 fans was as follows: "Twist And Shout", "She's A Woman", "I Feel Fine", "Dizzy Miss Lizzy", "Ticket To Ride", "Everybody's Trying To Be My Baby", "Can't Buy Me Love", "Baby's In Black", "Act Naturally", "A Hard Day's Night", "Help!" and "I'm Down".
Two of the songs: "She's A Woman" and "Everybody's Trying To Be My Baby" did not appear on the television special. The audio for "Act Naturally" is the studio version from the "Help!" LP. This song was not available in North America at the time of the concert so it must have been a huge surprise to the fans !!
Of all the songs performed, none of the original audio was used. The Beatles overdubbed either separate instruments or entire songs in January of 1966 and these were all eventually mixed in stereo. The only exception to this was the tune "Everybody's Trying To Be My Baby" which is the only song currently available commercially in it's original Shea Stadium performance audio with no overdubs. The song can be found on the Apple 3-LP/2-CD "Anthology 2". It's in mono although it's been said that there is a stereo mix available. The video of this performance was restored in the late 80s/early 90s and is currently sitting the vaults of Apple gathering dust.
https://www.youtube.com/watch?v=BmynC0Qopdw 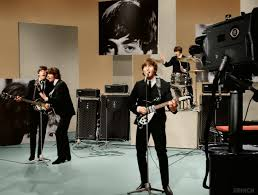 The Beatles taped a performance at CBS Studio 50 in New York City on August 14 1965. This show would be the premiere show of the series once it aired almost a month later on September 12 1965. The show featured the same tracks as the "Blackpool Night Out" performance. In fact, it is exactly the same line up of tunes: "I Feel Fine", "I'm Down", "Act Naturally", "Ticket To Ride", "Yesterday" and "Help!"
Two days after the performance, the single "Yesterday /Act Naturally" was released in North America. This means that both tunes were heard for the first time by a North American audience during the television performance.
This show can be seen on the commercial DVD of the Ed Sullivan performances released by Sofa Entertainment, but early audio of the show is available on the bootleg vinyl: "Peace of Mind" and "The Beatles Conquer America".
Here's a link to the video:
http://vimeo.com/99987916

Blackpool Night Out in '65 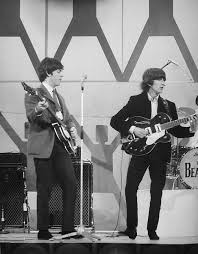 The Beatles made a television appearance in the UK on August 01 1965 in order to promote the new single. They played at the ABC Theatre in Blackpool in the UK. The show was entitled "Blackpool Night Out". The show's hosts for the evening were Mike and Bernie Winters. The show was broadcast live from the venue.
The setlist for this show is the same as the future "Ed Sullivan" show in the upcoming post. The setlist also highlights a short selection of what the US 1965 tour (including Shea Stadium) would feature.
The first song performed for the show was "I Feel Fine", a number one original single featuring John on vocals. This was followed by the current (for the time) B-side of the new single "I'm Down" featuring Paul on vocals and John on elbow-keyboard. Ringo then gets a turn on the vocals with his song from the upcoming LP : "Act Naturally". This is followed by the previous A-side single "Ticket To Ride" with John on vocals, a new song from the upcoming LP "Yesterday" played by only Paul and a string quartet hired for the occasion and finally the closing song being the new A-side single "Help!" - as well as being the title of the new LP and the new film.
The audio for this performance can be found on the bootleg CD "Pollwinners Go To Blackpool" although the Apple 3-LP/2-CD "Anthology 2" : namely "I Feel Fine", "Ticket To Ride", "Yesterday" and "Help!" were released commercially.
The entire performance can be seen here:
http://www.dailymotion.com/video/xttbor_the-beatles-on-blackpool-night-out-1965_music

The Beatles Live in Rome, Italy 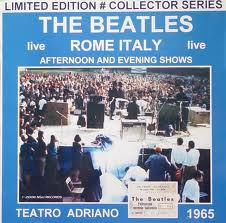 The Beatles continued their European tour by playing Rome, Italy with two shows on June 27 and June 28 1965. The afternoon show of the 27th is available for our sensitive ears as well as a little bit of footage from the evening show of the same date.
The songs of the show consist of the same set list as the previous Paris show of the same time frame: "Twist and Shout/She's A Woman/ I'm A Loser/ Can't Buy Me Love/ Baby's In Black/ I Wanna Be Your Man/ A Hard Day's Night/ Everybody's Trying to Be My Baby/ Rock and Roll Music/ I Feel Fine/ Ticket To Ride/ Long Tall Sally.
The afternoon show can be found on the vinyl bootleg Arrivano I "Capelloni" as well as the vinyl bootleg "Roma" and the bootleg CD "The Beatles In Italy 1965".
The evening show can be found as audio for the intro, "Twist And Shout", "She's A Woman" and "I'm A loser" which is also included on a bootleg EP "Live In Italy".
Posted by Mr. Kite at 9:52 AM 1 comment: