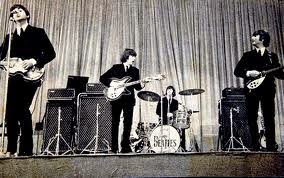 The Beatles played Paris, France at the Palais Des Sports on June 20 1965 for two shows: one of them around three in the afternoon while the other was the evening performance at nine at night. Both shows have audio counterparts as they were both recorded for radio and the evening show is available on video as well as audio.
This was the first show for the 1965 tour. The Beatles would be playing some dates in the early months of summer in Europe before making their way to North America for the rest of the tour. The set list for the two Paris concerts contained the following song: They opened with "Twist And Shout" leading into "She's A Woman". They followed this by performing "I'm A Loser" and "Can't Buy Me Love". "Baby's In Black" was next and then the spotlight was on Ringo for a live version of "I Wanna Be Your Man". This was followed by the first movie title "A Hard Day's Night" and the spotlight lit on George for a version of "Everybody's trying To Be My Baby". "Rock and Roll Music" was performed and then "I Feel Fine". The latest single of the era was performed via "Ticket To Ride" and they concluded the concert with "Long Tall Sally". The introduction to the songs were mainly in English although there was an attempt by Paul to speak French for some introductions to the songs as well.
The two main sources for both concerts are available on the following titles: "A Paris" is a double bootleg LP containing both the afternoon and evening show. The LP also contains some of the opening acts. The Swinging Pig CD "Live In Paris 1965" also contains both shows although the afternoon show is mislabeled as the evening show and visa versa.
The video of the evening show has been edited as follows and I have included a link to the entire show: "Twist and Shout", "She's A Woman", "Ticket To Ride", "Can't Buy Me Love", "I'm A Loser", "I Wanna Be Your Man", "A Hard Day's Night", "I Feel Fine", "Baby's In Black", "Rock And Roll Music", "Everybody's Trying To Be My Baby" and "Long Tall Sally".
http://www.dailymotion.com/video/xzpj2_the-beatles-live-at-paris-1965_music

The Beatles (Invite You To Take A Ticket To Ride) 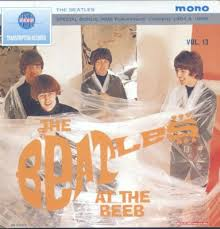 On May 26 1965, The Beatles recorded their last performance of live music for the BBC radio. The title of the show was "The Beatles (Invite You To Take A Ticket To Ride)" which was an attempt at an original title and was based on the fact that their latest title was also "Ticket To Ride".
The show was recorded at Studio One/ BBC Piccadilly Studios in London and the host for the show was Denny Piercy. The music featured was from the upcoming LP "Help!" as well as some tracks from the "Beatles For Sale" LP and the b-side of the previous single as well as the latest single.
The first song performed was the latest single A-side "Ticket To Ride" in an edited form as the introduction to the show was voiced over. This was followed by George singing the Carl Perkins classic "Everybody's Trying To Be My Baby" from the "Beatles For Sale" (UK) and/or "Beatles '65" LP (North America). The next song performed is written mainly and sung by John entitled "I'm A Loser" which was also featured on the above two mentioned LPs. The highlight of the show in my opinion is a smoking version of the "Help" album track "The Night Before" written mainly and sung by Paul. This also include the electric keyboard that is heard on the commercial version. An awesome track.
Ringo gets in on the action with his version of Carl Perkin's "Honey Don't". This is followed by a cover of "Dizzy Miss Lizzy" which is sung by John and again features not only the line up of guitars, bass and drums but also has the keyboard thrown in. The previous single B-side from the "Beatles For Sale" sessions is performed as the guise "She's A Woman" - an amazing performance with Paul on vocal for this one. The Beatles end the show with a reprise of the latest single at that time - "Ticket To Ride" - this time in full.
The entire show can be found on the bootleg LP "The Beatles At the Beeb Volume Thirteen" as well as on the box set from Great Dane entitled "The complete BBC Sessions" - disc 09, number 09, number 09.
Commercially, both "Dizzy Miss Lizzy" and "Ticket To Ride" were included on the Apple 2-CD/2-LP and 3-LP re-issue.
Posted by Mr. Kite at 10:16 AM No comments: 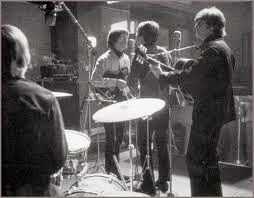 On April 13 1965, The Beatles entered EMI Studio2 to begin working on their latest movie title track "Help!". We have a lot of the various takes used during the recording process. I have included some of them at the bottom of the post via "Youtube".
The first take 1 breaks down and has all four Beatles playing on the song with John on acoustic, George on electric, Paul on bass and Ringo on drums.
Take 2 has Paul fiddling on bass before the song starts and then they get through half the first verse before stopping. The guitars fiddle a bit and another take is attempted. This time they get through the first verse, chorus, second verse and chorus, third verse and chorus and end. Take 3 ends at the second verse when John changes his chords a little early. Take 4 makes it through the entire song without George on electric due to the fact that he has problems trying to fit in the chorus arpeggios and it is suggested that he fit them in as an overdub (which he eventually does). Take 5 is also good although it is realized that the acoustic is starting to go out of tune. Take 6 stops less than a minute into the attempt. The guitar is tuned and The Beatles resume with take 7. Unfortunately, his guitar keeps going slightly out of tune and take 8 is stopped as well. Take 9 would become the basic track for overdubs. Both vocals (double tracked) and George's guitar are overdubbed to take 9. Tambourine is added to the vocal tracks as well.
There are various mixes available and a different vocal is heard for the mono mixes on the single and LP (in the UK). Three mono mixes include the production mix including tambourine and the original vocals in the introduction of the song, the second mix is the film mix whereby the intro is double tracked. The third is single tracked in the intro and no tambourine which is the single mix. The stereo mix has single track-original vocals and tambourine.
The entire session can be found on various bootlegs including "Turn Me On Dead Man" (CD), "The Beatles At Abby Road" (LP), "Ultra Rare Trax, Volume 3 and 4"(LP), "Hold Me Tight" (CD), "Unsurpassed Masters, Volume 6"(CD", etc.
https://www.youtube.com/watch?v=1wUTQ4W3V7Y 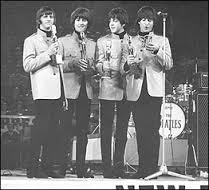 The Beatles performed  in Wembley at the Empire Pool Stadium for the NME Pollwinners concert which took place on April 11 1965. The Beatles had been filming their second feature and took a break to perform this unique concert. For the occasion, the "Shea Stadium" suits were worn for this concert.
The songs performed for this set include the number one smash single "I Feel Fine" and the B side "She's A Woman" in a row featuring John on the A side vocal and Paul on the B side vocal. The next song performed is a track from the latest UK Beatles "For Sale" LP; namely "Baby's In Black" with both John and Paul shared the vocal on this one.
Next up is the latest single, so fresh in fact it had been released in the UK only two days before: "Ticket To Ride" which would show up on the second film soundtrack as well. The last song of the set was the title to the previous year's all original EP in the UK, "Long Tall Sally" belted by Paul.
This would end the concert before awards were handed out namely to John Lennon for "Runner Up in British Vocal Personality" and the entire group for "Top British Vocal Group". The awards were handed out by none other than Tony Bennett !
I've included the entire concert and award presentation below for your viewing pleasure:
http://www.youtube.com/watch?v=COSSsu1GSCk